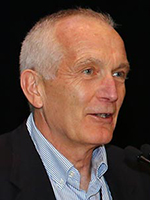 John Beghin’s faculty profile at the University of Nebraska-Lincoln

John Beghin joined the University of Nebraska-Lincoln in 2019 as a professor and the Michael Yanney Chair in International Trade and Finance in the Department of Agricultural Economics and the Clayton Yeutter Institute of International Trade and Finance. John's teaching, research and outreach programs focus on international agricultural trade and non-tariff barriers. John is a faculty fellow with the Daugherty Water for Food Global Institute at UNL and with the Center for Agricultural and Rural Development at Iowa State University.

Throughout his career Beghin has held various appointments, worked as a consultant for various organizations and private clients, and published over 100 articles and book chapters. He is considered an expert in international agriculture and food markets economics. His areas of interest include nontariff measures, trade and the environment, global food security, and policy analysis. His work is widely cited. He is a Fellow of the Agricultural and Applied Economics Association, the main professional association of agricultural economists. John is married to Yalem Teshome, a professor of practice at UNL. They have a daughter named Carla, an economist, who lives in Cincinnati, and 2 ferocious labradoodles, Jack and Jill.

Biofuel and Feedstock Markets and the EU-US TTIP
John Beghin

Assessing Food Security in Tanzania in the Next Decade
John Beghin