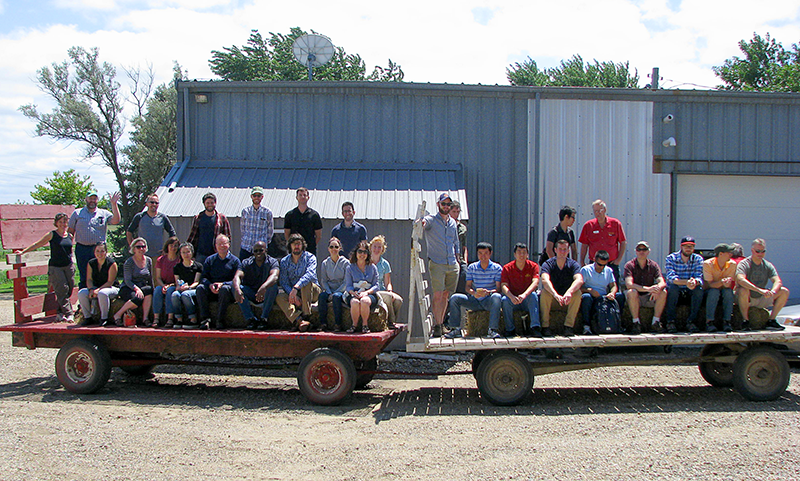 more photos at bottom of article
Approximately 25 employees of the USDA Economic Research Service (ERS) joined researchers, faculty, and staff from CARD on a four-day agricultural tour in Iowa, August 2–5.

CARD Director Cathy Kling said that economists from ERS typically hold an agriculture tour every year following the Agricultural and Applied Economics Association (AAEA) annual meeting, and that she felt it would provide a good opportunity for ERS employees to see behind-the-scenes of Iowa agriculture. “I thought that by having the ERS staff tour Iowa, we could develop closer connections between ISU’s economics faculty, postdocs, and grad students and ERS staff,” Kling said. “Also, I know some CARD grad students, postdocs, and new faculty have not seen much Iowa agriculture up close, that’s an important element as well,” she added.

Kling coordinated with Richard Nehring, who has worked in the ERS Resource and Rural Economics Division for over 20 years, to plan the tour stops. Nehring said he has done eleven such agriculture tours in the past. “I missed a family trip to Italy,” Nehring joked, “so I decided to do farm tours instead.”

En route to Ames from the AAEA annual meeting in Chicago, the tour stopped at the Keltner family’s corn and soybean farm in Pearl City, Illinois. Later in the day, they stopped at Neal Smith Wildlife Refuge, an 8,600+ acre wildlife refuge located just outside Prairie City, Iowa, to learn about Iowa’s native prairie habitat and current restoration efforts.

The second day of the tour started off at the office of Seaboard Foods in Ames. Seaboard Foods is part of the multinational agribusiness conglomerate Seaboard Corporation. In the US, Seaboard Foods is primarily a multi-stage pork producer with operations in six states (Oklahoma, Missouri, Kansas, Colorado, Iowa, and Texas). In Iowa, their operations are mainly focused on hog farming and a feed mill located outside Iowa Falls.

Seaboard employees Kevin Sanders and Steve Huegerich detailed the company’s Iowa operations, and spoke about some of the challenges the company, and Iowa’s pork industry, are facing. Huegerich, noted that in the pork industry trade agreements (such as NAFTA) are often more important than the effects of the farm bill. “Mexico is the largest growth market, and if they started importing pork form somewhere else, it could be devastating to Iowa pork,” he said.

Typically, corn, soybeans, and pork are the elements of Iowa’s agriculture industry that receive the most attention. The next tour stop, however, provided an in-depth look at an egg production facility, an often-overlooked, but vital part of Iowa’s agriculture. Iowa is the nation’s largest egg producer, producing more eggs than the second- and third-largest states combined. Joe Scanlon, the owner/operator of The Good Eggs LLC, guided the tour and discussed the ins and outs of his 1.2 million hen facility. Scanlon discussed challenges of biosecurity, running a 365-day-a-year operation, and how the rise in demand for cage-free eggs has slowly started driving other options out of the market.

At the farm of Al Kadolph, near Hubbard, the group got to see different runoff control measures and Agricultural Research Service (ARS) experiment stations. Kadolph, who serves on the Hardin County Conservation Board and as president of the Southfork Watershed Alliance, said that he gets his conservation mindset from his own father, “It’s about be willing to try the programs and see if they work,” he said. Kadolph is currently using grass buffers in several areas around his corn and soybean fields, and has set aside areas on his farm for ARS experiments.

Jeff Cook, an ARS engineering technician, spoke to the tour about some of the ARS experiments being conducted on Kadolph’s farm, including weather monitoring equipment and filter socks. Filter socks, long mesh tubes filled with wood chips, charcoal, and other materials, are used to help nitrogen from leeching out of crop fields into nearby water sources. Cook said that every farmer has to make a decision for themselves about what type of pollution control to implement. “It all comes down to dollars and cents—what works and what doesn’t,” he said.

Friday’s portion of the tour started off at the AgPartners, LLC feed grinding facility in Ellsworth, before heading to the Handsaker farm in Hardin County. At the Handsaker farm the group learned about drainage tile in farms, and was given the opportunity to see some farming implements, such as row-planters and harvesters.

Kling said that she felt the tour was successful. “I have already heard of two new research projects between ISU faculty and ERS staff, so I would say that’s a big success.” 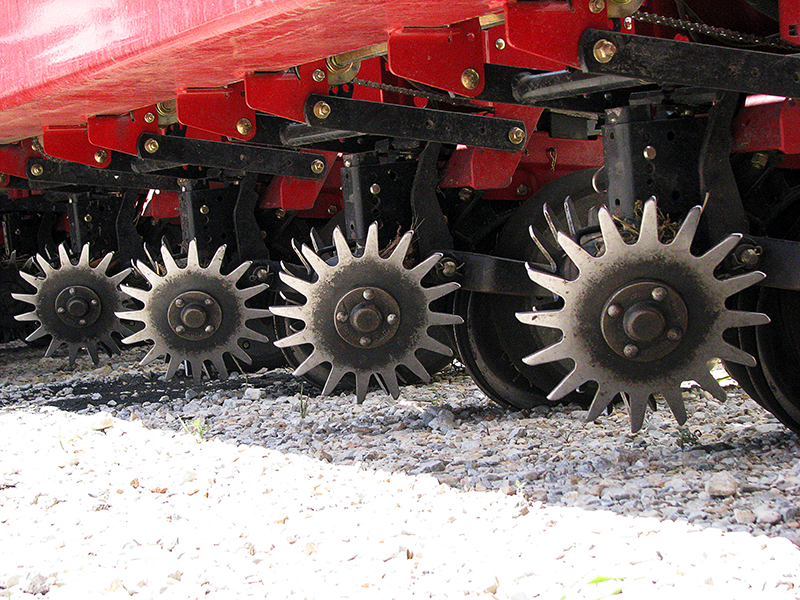