Murray 1967 - Palimpsest - Iowa Land Values 1803-1967
Great article by Dr. William Murray on the history of Iowa land values from the Louisiana Purchase to 1838, Public Land Sales from 1838 to 1860, World War I and Land Boom-Bust in early 20th century, the Great Depression, the World War II and Green Revolution.

Harris 1980 - Iowa Land Value Survey Statistical Methodology
Report by Dr. Harris in 1980 which outlines the statistical methodology, which is still used currently, to quantify the county-level land values based on responses to ISU Land Value Survey, Census of Agriculture, and influences of neighbouring counties.

Walker 1976 - Dissertation - The determination and analysis of Iowa land values
One of the first dissertation that examines Iowa land values and outlines Walker Districts that groups Iowa counties based on similarities in soil and market characteristics.

Duffy and Bruere 2014 - Socially Responsible Farmland Investment
This report was co-authored by Dr. Mike Duffy and Mr. Steve Bruere, CEO of Peoples Company. Socially responsible land investing equates to thinking about more than just cash rents or dollar returns. The idea is to leverage the power of the technology and advances in agronomy to produce more on the good land while conserving more fragile acres. The questions being raised are both important and fascinating regardless of one’s view on population growth, climate change or water quality. 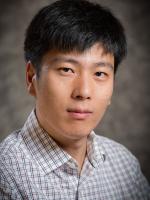 Dr. Wendong Zhang is an assistant professor in the Department of Economics at Iowa State University since August 2015. As an applied economist and extension farm management specialist, he is interested in land use, land management, land values and land ownership in the agro-ecosystem, as well as the interplay between agriculture and the environment. Dr. Zhang is also affiliated with Center for Agricultural and Rural Development (CARD).

Dr. Zhang is the leading researcher of the Iowa Land Value Survey since 2015, the Iowa Farmland Ownership and Tenure Survey, as well as the ISU Soil Management and Land Valuation Conference. He also led the development of the new, interactive Iowa Land Value Portal.

Fun Fact: Dr. Zhang started the online mode for the ISU Land Value Survey in 2015, in addition to the traditional mail mode. 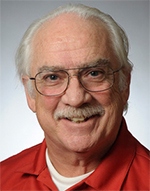 Dr. Michael Duffy received his Ph.D. in Agricultural Economics from Penn State in 1981. He received a B.S. in Natural Resources from University of Nebraska in 1975 and a M.S. in Agricultural Economics from Nebraska in 1977. He joined the ISU staff as an Extension area farm management specialist in 1984 and moved to his present position on campus in 1985. Prior to joining Iowa State he worked as an economic researcher for the USDA in Washington, D.C.

Dr. Duffy works as an Extension Economist in farm management at Iowa State University. He was the Director of Graduate Education in Sustainable Agriculture.

Fun Fact: In 2009, Dr. Duffy was named one of the top 25 Iowans of influence by Iowa Farmer Today for his work on land value, farm management and sustainable agriculture. In 2016, The Board of Directors of the Chicago Farmers have chosen Dr. Duffy to receive the “Distinguished Service to Agriculture Award” for his “lifetime of involvement with and research on the farm sector.” 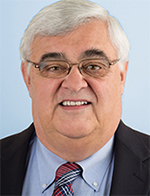 He served as Manager of Business Analysis at General Mills, Inc. from 1982 to 1987, where he worked in business development activities. Dr. Harris was the Founder and Managing Partner at Northstar Capital, LLC from 1993 to 2001. Prior to that, he was a Senior Vice President at Churchill Capital, Inc from 1987 to 1993. At both the firms, Dr. Harris served as a Senior Manager in the investment process for over 50 transactions.

Before entering the private equity fund management business, he spent five years in strategic planning at General Mills, Inc. Dr. Harris served as an Economist at the Federal Reserve Bank of Philadelphia from 1969 to 1972. He served as an Assistant Professor, Associate Professor, and Professor at Iowa State University from 1972 to 1982. Dr. Harris was the lead researcher of the ISU Land Value Survey from 1974 to 1982.

He graduated from Iowa State University in 1966 with a B.S. in Industrial Administration and an M.S. in Economics in 1968. Dr. Harris received his Ph.D. in Finance from the Wharton School at the University of Pennsylvania in 1971.

Fun Fact: Dr. Harris developed the statistical methodology in 1980 that is still used to calculate county-level land values in Iowa. 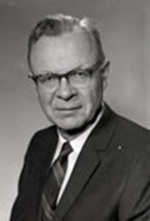 Dr. William Gordon “Bill” Murray was born on July 15, 1903 in Cedar Rapids, Iowa, to Dr. Frederick G. and Jeanett (Stevenson) Murray. He received a B.A. (1924) from Coe College in economics, an M.A. (1925) from Harvard University in economics, and a Ph.D. (1932) from the University of Minnesota in agricultural economics.

Dr. Murray served as a graduate assistant (1925-1926) in the agricultural economics department at Iowa State College (University). After briefly serving as an Assistant Agricultural Economist with the United States Department of Agriculture, he returned to Iowa State as an Assistant Professor of Agricultural Economics (1927-1931). He was promoted to Associate Professor (1931-1937), Professor (1937-1974), and Professor Emeritus in 1974. Dr. Murray also served as the Head of the Department of Economics and Sociology at Iowa State (1944-1955). He started the Iowa State University Land Value Survey in 1941 and was a lead researcher until he retired in 1974.

Dr. Murray received an international award for distinguished service to agriculture (1957) from Gamma Sigma Delta, honor society of agriculture. He also served as president (1948) of the American Agricultural Economics Association. In addition, the Iowa State University Alumni Association awarded him with a Faculty Citation (1965) and he was named Professor of the Year by the Government of the Student Body (1974).