Do You Remember? - Xiadong (Sheldon) Du 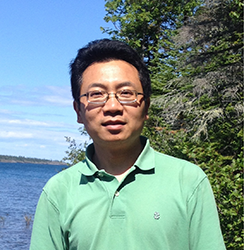 Sheldon came to the United States in the fall of 2000, when he chose to purse an MBA in finance at the University of Kansas. Previously, he had earned a bachelor’s in engineering and a master’s in economics from Jilin University in Changchun, China.

Sheldon first got involved with CARD in 2004 working for professor Beghin, while professors Hayes and Hennessy acted as his major professors. “I learned a lot from working with them,” Sheldon says. “Also working closely with my FAPRI colleagues gave me tremendous help both professionally and personally.” While he remembers his time working at CARD fondly, Sheldon said his one of his best memories was when his first working paper was published online in 2007.

In 2008, he completed his degree and began working as a livestock analyst for FAPRI, before leaving the university in 2010 and taking an assistant professorship at the University of Wisconsin-Madison.

Sheldon married another former CARD colleague, Fengxia Dong, and the couple currently lives in Madison where they raise their two children, Kaitlyn and Kevin.