Do You Remember? - Willi Meyers 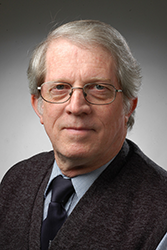 Willi Meyers recalls feeling attracted to a career at ISU due to his involvement with International Volunteer Services. “I was an IVS volunteer in Vietnam from 1963–65 and later team leader,” he said. “As a math major I was not sure where to go next, but John Mellor was on the board of directors of IVS and he suggested math was a good background to study economics,” which eventually led him to study agricultural economics at the University of the Philippines.

After his time in the Philippines, he worked in the Forecast Support Group of ERS 77–79, “the writing on the wall was that we would be disbanded and moved to commodity sections of ERS, so I began applying to University positions,” he said. “ISU was attractive because of the international opportunities that still interested me from my previous IVS experience. Earl Heady had international projects as did Lee Fletcher and others.” Meyers started at ISU in 1979, and began teaching and building international commodity models with international Ph.D students. During his time at ISU, he spent time working on policy analysis projects in Indonesia and the Philippines, and by 1984 had worked with the University of Missouri in establishing FAPRI. “At the beginning that was called Center for Trade and Agricultural Policy (CTAP), but when Stan Johnson was hired to replace Earl Heady as Director of CARD we agreed to bring CTAP into CARD as one of four research divisions, and I became Associate Director of CARD—that’s how I became a ‘CARDie’.” Meyers also served as interim director from 1996–98, between Stan Johnson and Bruce Babcock.

Meyers says he remembers “the strong international engagement and multinational composition of the research and researchers,” at CARD. Because of Heady's early work with scientists in the USSR and East Europe, Stan and I were able to open many collaborations in the region from 1988 and onward. I continue to be heavily engaged in Central and East Europe, Russia and Central Asia and am writing this from Moscow, where I am working on food security MS programs with Moscow State University.”

After leaving CARD, Meyers went to FAO in 1999, and is currently employed at the University of Missouri. He currently resides in Columbia, Missouri, with his wife Dalisay. They have two children Naila-Jean, the sports editor at the New York Times, and Celina-Beth, a project coordinator at Datastat Inc. In his free time he enjoys traveling and doing Sudoku.