Do You Remember? - Steve Elmore 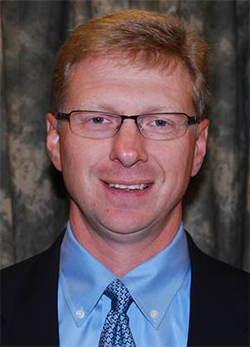 My interest in economics probably started when I was growing up in the 1970s and ‘80s. My dad was a high school civics teacher that taught economics and my mom taught in the College of Business at the University of Nebraska at Kearney. Our family environment was always based on knowing the current events and the interaction to our lives. Our family farm was north of town and we would drive by land that was idle due to the government programs for price controls and farms that faced financial hardship due to the ag crisis. We would use the drive time to have discussions about the markets and the impact of government policy on farmers’ financial situations. Probably as a result of that upbringing, I completed a BS in political science and economics from Kearney. I went on to school at Texas A&M and University of Nebraska Lincoln.

What brought me to CARD was Willi Meyers offering me a great first job as the Iowa & US Policy and Market Analyst at FAPRI. From 1995 to 1998 was an exciting time for agricultural policy analysis. Fifth floor Heady Hall at Iowa State University (along with sister programs at Missouri, Texas A&M, Arkansas, Arizona St. & NDSU) was at the heart of this economic policy analysis that changed the future of agriculture globally. This fact is not understated. At that time we analyzed the impacts of GATT (that led to the WTO), NAFTA, EU CAP reform and the “Freedom-to-Farm” in the United States. We had a diverse group of staff members and had visiting scholars from around the globe looking that the changes in the ag systems. This diverse set of opinions and viewpoints at CARD led to solid forecasting of the impacts from the global sectors all the way to the income and sustainability of the Iowa farmer and US consumer.

Even though people still ask where I went to school, I pause and take a step back and tell them I was educated at Iowa State University, specifically CARD. The fast pace, meaningful analysis was a very unique experience. We had to run high level econometric models, then we had to take the results and communicate them in graphic and word form with very hard deadlines. The audience was not just economists. We had to communicate to bureaucrats, policymakers, agribusiness leaders, and farmers. I have continued to build on this foundation since I left CARD. I have had the privilege to work at Pioneer Hi-Bred, now DuPont Pioneer, for nearly two decades and currently hold the role as Director of Market Intelligence and Chief Ag Economist. I have been able to travel globally and give presentations on agriculture on every continent except for Antarctica. I am on government committees, and helped lead the development of the Global Food Security Index, sponsored by DuPont and run by the Economist Intelligence Unit (EIU). I have a great economics team here that includes two professionals that have advanced degrees from ISU. The fact is that the CARD way of applying high level economics to help solve real world problems in a fast pace environment has been a solid advantage for me in the business world.

Professionally, FAPRI in CARD at Iowa State had a profound impact on me. But more importantly the personal impact cannot be measured. Like many CARD alumni I have worked with talented colleagues that are great people and we stay in contact today, both professionally and personally. What makes me a rarity is that my wife, Ellen, is also a CARD alum (1994–96). Before she came to CARD as the Database Developer she earned bachelors in MIS from Iowa State and an MBA from Drake. In 1997, she moved on to do a short stint in Iowa State Extension about the same time Stan Johnson moved over. We have two boys that are in Jr. and Sr. High in the West Des Moines school district. At this point in our lives, Ellen and I fill our time with their activities. We also support the Cyclone athletics and like to travel as a family.