Do You Remember? - Silvia Secchi 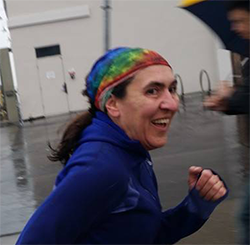 Silvia’s interest in economics was spurred by a economics teacher at the international high school she attended in Italy. “[he] really contextualized economics for us, its importance for society, and the history of the discipline,” she said. “At the same school I also had a terrific biology teacher. I think on some level I’ve been trying to figure out how to work at the intersection of economics and the environment since then.”

After finishing a master’s degree in agricultural economics at the University of Reading in England, Silvia began researching Ph.D programs, when her adviser was contacted by professor Moschini. The interaction resulted with Silvia working for CARD as a student under Bruce Babcock and Terry Hurely from 1996 to 2000 studying pesticide resistance issues. After her graduation, Silvia began working as a postdoc and eventually as a research scientist for the Environmental Policy division at CARD. “To a large extent, my memories of the US and of CARD are one and the same. I think the thing I remember and miss the most is the camaraderie with colleagues. I still work with Phil Gassman, Amani Elobeid, and Luba Kurkalova, but we are no longer physically in the same place. I remember the winter weather too, but I don’t miss it!”

Working for CARD helped Silvia prepare for her career in a numerous ways, she said. “The CARD experience after I graduated helped me in a ton of ways: writing grants, learning new tools, having to meet deadlines, working in large groups and across disciplines, identifying good collaborators and policy-relevant research issues… It was an incredibly formative experience.”

Currently, Silvia works as an associate professor in the department of Geology and Environmental Resources at Southern Illinois University where she does interdisciplinary work on human-environmental interactions, and conservation and land-based energy policy.

Sylvia, her husband (who was an anthropology Master’s student on the second floor of Curtiss when she worked at CARD), and their two kids (Eleonora, 12, and Eloisa, 9) live in Carbondale, Illinois. “[I live] just south of where the Missouri and the Mississippi meet and north of the Ohio-Mississippi confluence. It’s the perfect place since so much of my work has been about the Old Man River,” she said. In her spare time Silvia and her family like cooking, and spending time in the natural surroundings of Illinois. “Carbondale is surrounded by lakes, a national forest, state parks and a national wildlife refuge. My husband and I like to run in the parks with our dogs (we have three). In the summer it gets really hot, so we enjoy swimming and stand-up paddle boarding in the local lakes. We take the dogs along for that too… We also like to cook, and since we live out of town on 8 acres, we have our own chickens, and an outdoor cob oven, where we bake our own breads and pizzas.”