Do You Remember? - Sheila Martin 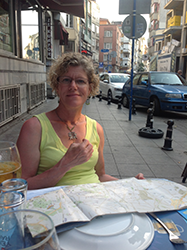 Sheila had made her way to CARD through Michael Crow, an acquaintance she shared in common with Stan Johnson, who was director of CARD at the time. Sheila had been working with Michael at the University of Kentucky, and when Michael left his position to work at Ames Lab, knowing she was looking for a graduate program, he introduced her to Stan. She attended the annual CARD picnic that year, and immediately felt that Iowa State would be a good fit for her. “I specifically remember feeling welcomed and believing that being part of CARD would help me succeed in my graduate program,” she said.

As a graduate assistant, Sheila spent the next few years examining rural economies with Dan Otto and Stan Johnson in the rural development division. “I felt inspired by the work ethic and commitment of the CARD faculty, staff, and students and I also knew that they had my back,” she said. “The research experience I gained at CARD and the evidence that I could produce reports for clients led to my first post-Ph.D position at RTI international. I was used to working both independently and as part of a team on projects with deadlines and deliverables that had to be methodologically defensible and well written.”

After leaving CARD, Sheila worked for the Governor’s office in the state of Washington, serving as Governor Gary Locke’s economic development advisor for five years. “My experience with rural economies in Iowa and other Midwestern states very important for that position,” she said.

Currently, Sheila lives in Portland, Oregon with her 17 year old daughter and works as a faculty member in the Nohad A. Toulan School of Urban Studies and Planning and the director of both the Institute of Portland Metropolitan Studies and the Population Research Center. In her free time Sheila enjoys, hiking, camping, biking, and cooking for her family and friends.