Do You Remember? - Patrick Westhoff 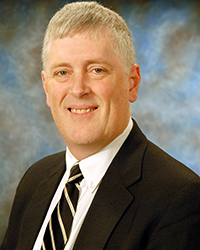 Patrick Westhoff is a self-described “latecomer” to economics. He majored in political science at the University of Iowa, then spent two years in the Peace Corps in Guatemala. When he returned to the states, he first decided to pursue a master’s degree in Latin American studies at the University of Texas, but was ultimately persuaded by an adviser to pursue a Ph.D in economics.

Westhoff’s adviser recommended several programs, among them ISU, when he learned Patrick was interested in economics and hoping to use his career to make a difference in the world. “I was very relieved when I got a phone call from Willi Meyers asking if I'd be interested in coming to Iowa State and working with him. I was incredibly fortunate that he decided to take a chance on me, as I had a very limited background in economics,” he says.

In 1983, Patrick became a research assistant at FAPRI, and eventually took on a full time research associate position in 1986. “A lot of our work with FAPRI and CARD was very intense, but we also had a lot of fun,” he says, recalling playing for the CARD Sharks softball team, the weeklong baseline “meltdowns,” and “’Walk like an Egyptian,’ the official song of the baseline one year.”

After he left ISU in 1992, Westhoff took a position as an economist with US Senate Committee on Agriculture, Nutrition, and Forestry. Four years after taking a position in Washington, Patrick joined the University of Missouri FAPRI team in 1996. “My career would not have been possible without my CARD experience,” he said.

Currently, Patrick resides in Columbia, Missouri, where holds a professorship in the department of agricultural and applied economics, and serves as director of FAPRI-MU at the University of Missouri.

Patrick and his wife, Elena, live in a Civil War era house, which they are currently spending a lot of their free time restoring. “Maintaining our old home and the surrounding property absorbs a lot of our free time,” he says. “As empty nesters, Elena and I enjoy the chance to go to a movie on a Tuesday night, and we've had a chance to make some fun trips,” he added.