Do You Remember? - Mike Helmar 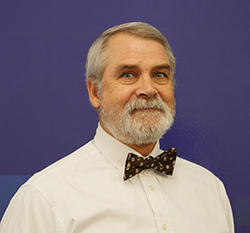 Currently Resides in: near Reno, Nevada

Mike Helmar’s career in economics began at the University of Nevada—Reno, when he took an Environmental Economics class while pursuing his undergraduate degree. After graduating from UNR and working for the Nevada Division of Forestry, he decided to pursue a master’s degree. “I enjoyed the class I had taken as an undergrad so much that I thought I would give the Ag Economics program a try, with the expectation that it would be useful in pursuing positions within the forest products industry,” he says. “Instead it opened up many doors outside of that industry.”

While working on finishing his master’s degree, Mike was offered a job working for the new FAPRI program by Willi Meyers. “I packed up my family and household goods in a U-Haul truck and drove halfway across the country. I started with FAPRI at ISU in January 1984. Shortly thereafter, FAPRI was integrated with CARD,” Helmar says.

Mike worked for CARD from 1984–1996 as a research scientist helping estimate and build FAPRI international crop models. “These models were used in constructing annual 10-year baselines and performing scenario analysis of agricultural policies, both domestic and in other countries. We worked on several farm bills, NAFTA issues, and the GATT negotiations of the 1980s and 1990s, among other projects,” he says. Mike says that his work at CARD also gave him the opportunity to work with scientists in Australia, Canada, and Hungary. “I also was able to go to Hungary twice with the National Farmers’ Union shortly after the centrally planned economies were changing to free markets. We presented the workings of global markets in grains and oilseeds to groups of Hungarian farmers.”

Currently, Mike works at the University of Nevada—Reno, and notes that his experiences at CARD have helped his career come full circle. “The experience I gained with modeling, analysis, presenting, and project management has been crucial in every other job I have had since leaving CARD, and prepared me for leadership and management positions,” he says. “It is funny how it has come full circle, as I work at my alma mater, doing much of the same type of international crops work that I did in my early days in FAPRI and CARD. Today, I still work directly with Stan Johnson, the former Director of CARD on several consulting projects dealing with energy policy, and agricultural markets in Kazakhstan.”

Mike says he now thinks of the people he worked with at CARD as his fondest memories. “Even today, when I go to professional meetings, there will likely be old friends from CARD representing other universities, companies, and agencies. At the most recent FAPRI baseline review last December in Washington, DC, I can remember no fewer than nine former CARD members at this relatively small meeting. CARD really has had an impact on the ag economics profession.”

When he’s not working, Mike enjoys cross-country skiing, snowshoeing, and spending time outdoors with his wife, Janet. “We live on 21 acres in a beautiful high-desert valley about 30 miles north of Reno, Nevada, in the western basin and range region,” he says. “I also like to fish and attend sporting events, especially baseball. We are active in our church, and volunteer with Samaritan’s Purse, a Christian disaster relief organization, helping people in the aftermath of natural disasters.”