Do You Remember? - Kisan Gunjal 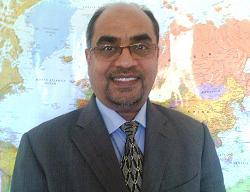 Kisan Gunjal, who would become one of Earl Heady’s last graduate students, first heard about CARD when he was a master’s student. “When I was in India doing my master’s degree, one of my professors had just returned from CARD—he was the best teacher and my role model. He told us many wonderful things about America and especially studying at ISU.”

Kisan then joined CARD from November of 1977 to December of 1981. He said he remembers the “family atmosphere” Dr. and Mrs. Heady created for the students, and “the friendships I made at ISU and working with other graduate students, from different countries and cultures at CARD.”

Kisan said he feels that working at CARD helped him get prepared for his career. “I think the CRD students were very well prepared for a multitude of career choices because we had a good grounding economic theory, quantitative methods, and practical experience of project work. Less so in teaching itself but most of us who went to academic careers picked that up easily,” he said.

Since leaving CARD, Kisan has had an active career. He spent 20 years as a professor at McGill University in Montreal, Canada, before moving to Rome and working as a food security economist for the United Nations Food and Agriculture Organization.

Kisan now works as an international consultant in global food security at the non-profit iREAMDevelopment organization in Montreal, Canada, where he resides with his family. In his spare time he enjoys playing tennis and pool, reading, and going to the movies.