Do You Remember? - Holger Matthey 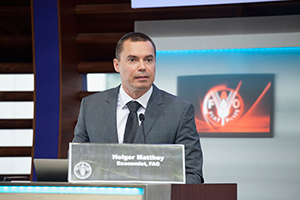 Holger first came to the US in 1992, shortly after the reunification of Germany. He had been studying at the University of Leipzig, but the German reunification caused a restructuring of the agricultural college, leaving Holger seeking an alternative place to finish his degree. Fortunately, he was awarded an Ambassadorial Scholarship from Rotary International, which paved the way for him to come to the United States.

“Working at FAPRI gave me a sense of achievement,” Holger says. “We produced a clearly defined output that was appreciated by the clients.” Holger said he remembers the “all-nighters” during Meltdown and Baseline weeks. “[They] were tough, but again, we were proud to complete the job. FAPRI was a great opportunity and a fun place to work,” he said.

In 2005, Holger left FAPRI to take a position with the Food and Agriculture Organization of the United Nations. He has remained there since, and currently serves as an economist at the Trade and Markets Division, leading the team that produces the annual OECD-FAO Agricultural Outlook. “[FAPRI] is where I got into the outlook business, and I’m still in it,” he said.