Do You Remember? - Edward Yu 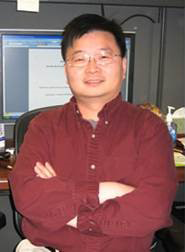 Edward says that collaboration with others and the FAPRI world agricultural outlook are what he remembers most about his time at CARD. “The process of developing [the outlook] extended from October through March. The meltdown and baseline weeks are always intense and challenging. Fortunately, working with a group of experienced and team-oriented colleagues makes the process also enjoyable!” he said. “The close collaboration with other scientists and faculty in the Center and other universities/institutes really helps me develop the skill to efficiently communicate with my collaborators to achieve the joint goal.”

Currently, Edward is an associate professor in the department of agricultural and resource economics at the University of Tennessee. He resides in Knoxville with his wife and son, where he spends his free time playing with his son, watching ball games, and listening to music.