Do You Remember? - David W. Brown 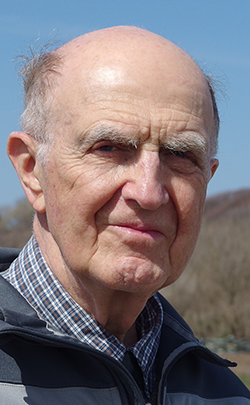 David Brown grew up on a Connecticut farm in the 1930s, something he credits with building his interest in economics. Worries from the Depression bled over into the 1940s with concerns about poverty and soil depletion, and into the early 1950s as marginal farm families had difficulties surviving. David’s interest in socio-economics continued as he studied at the University of Connecticut as an agronomy student. “Good ag econ professors at UConn exposed me to farm budgeting, price analysis, and marketing and policy diagnoses,” he says. “Surprisingly, graphic-correlation analysis in a term paper led to my receiving second prize in a national grain-company essay contest.”

His time at the University of Connecticut was also what brought him to Iowa State—one of his professors, George Judge, obtained his PhD from Iowa State. David says his Master’s work at Cornell further reinforced his desire to study at Iowa State. “My application brought a letter from Earl Heady, inviting me to study under him. One didn’t turn down something like that!” he says. “In 1954, CARD wasn’t yet formed, but Heady had become known for shaping a unique program that applied strong economics and quantitative tools to key ag resource-use decisions.”

David says that as a grad student he taught introductory economics under his senior professor, “Duke” Arthur. “Earl Heady added his own chores: First I helped a poultry prof translate his input-output data into production functions. Then, reflecting my farm-survey experience at Cornell, Heady geared me up to design and lead a sample survey in Iowa’s Tama-Muscatine soil area. The aim was to see how farm leasing arrangements (crop-share, cash, etc.) affected resource-use efficiencies,” he said.

David says his 1954-56 period at Iowa State left him with a lot of memories, such as:

·  How Earl Heady helped us “grow” by giving us lead roles as we became “senior elders” among his 25 or so students.

·  How we had to think carefully before adding variables and fancy twists to our quantitative analyses. Few computers then … mainly clunky desk calculators … had to look up logs, random numbers, etc. from tables. Preliminary plots and tabulations often helped.

·  Incisive seminars and workshops, but not built around egos or trying to put down others – besides the Heady group, also John Timmons (land econ), Beale and Bohlen (rural sociology), Stat Department pioneers, Bob Parks (government), extension folks (with Iowa leaders).

·  The interactions with fellow grad students, many of whom had World War II, extension, USDA and other experience in a spectrum of states and countries.

·  The delights of having some characters in our midst, like Gerhardt Tintner.

·  Broader ISU lectures and cultural events. (E.g., the New York Philharmonic loved the appreciative audiences at ISU, even though they had to dress in a trailer behind the Old Gym.)

He also says that his best memory, of course, was meeting Jeannie, who he would later marry. “Our 1956 marriage led to 16 years with the U of Tennessee, and innovative roles in Singapore, Texas, Peru (with the Iowa agrarian-reform team), 1967-68 back in Ames, Rome with FAO, Indonesia, Pakistan, and (since retirement) Rhode Island,” he says. He also added that going to Tennessee didn’t mean leaving Ames behind. “The Tennessee Valley Authority was hiring economists for its programs in agricultural and rural development, fertilizer materials production and use, and watershed protection. TVA had close Iowa State links, and hired a few of my PhD contemporaries. Earl Heady himself was there at times to help guide plans and analyses.”

After leaving CARD, David says he took positions with the University of Tennessee and Texas A&M, but eventually left both positions to help build new programs and institutions in other places. “Instead of journal articles, most of my writing has been for outreach, leader briefings, training courses, and progress reports. I use simple diagrams to come to grips with complex issues and choices. Overseas there seldom has been time to do full-blown studies; rapid reconnaissance and guesstimates have been bywords. Human, cultural and institutional factors have been pivotal. Eclectic gleanings from other social sciences, systems analysis, and high-tech fields have been pivotal,” he says. “I still view the world through ISU-tinted glasses—focus on good use of limited resources, and not models for their own sake, frames for tackling risk-and-uncertainty, equity, location, and sustainability issues, a conditional-normative mode, rather than imposing values, yet weaving in local values and ethical constraints, and not selling out to special interests.”

David’s last full time job was with the Illinois USAID team in NW Pakistan, but he only took a partial retirement. “Besides more overseas doings and some teaching at Salve Regina U, I’ve been on a bunch of local/area boards related to land-use planning, urban tree stewardship, soil conservation, small-farmer adjustments, affordable housing, environmental cleanups of old Navy sites, international visitors, and policy discussions.”

Jeannie, David’s wife, passed away in 2011, while David’s daughter, Cheryl, lives in Oakland, CA, and his son, Kevin, lives with his two daughters in Miami, FL. David, for his part, has managed to stay busy since fully retiring. “At 85, this old ag economist has survived cancer and is still chugging. I have been co-chairing the Navy environmental cleanup advisory board, go to other civic meetings, feed micro-weather info into the RI Tree Council, am into amateur radio for emergencies, learn from the rich experiences of older folks here at the retirement center, and walk near the ocean for exercise. My learning is broadened by reading The Economist, some journals beyond AAEA’s, and Labyrinth sales catalogue books – lately, agrarian and socio-econ history that could be relevant. Sometimes I take part in national webinars. Especially fulfilling is interacting with former students and colleagues, and with young people here … and having occasional influence as a sounding board. Mornings usually find me jotting down ideas for the next civic input or legacy bit. (If only I could draw good cartoons, to help declutter and lighten up some discussions.) The retirement joy of having uninterrupted time to reflect and focus on (hopefully useful) things is not to be missed!”