Do You Remember? - Dave Krog 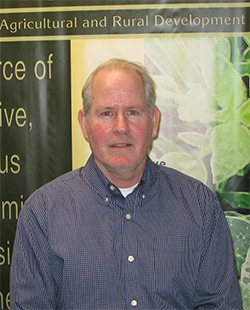 Like a lot of Iowans, Dave Krog grew up on a farm. “That’s how I got into agronomy,” he says. “The plan was to go back [to the farm after college], but dad didn’t really encourage that.” Krog says that he knew from a young age that he would attend ISU, but at the time he didn’t have any plans on attending graduate school. Once he was here, he got interested in future’s markets. “That’s why I applied to grad school—I wanted to get into future’s market trading,” he said. Dr. Earl Heady, however, was able to steer Dave in a new direction.

Dave had already earned his bachelor’s in agronomy and was working towards his master’s in economics when Dr. Heady spoke to him about the Ph.D. program. “Towards the end of my master’s, Heady pulled me into his office, an hour later I was in the Ph.D. program,” he says.

While he was working on his master’s with Dr. Heady, Krog says his work mostly focused on topics like best management practices for soil conservation and evaluation of conservation practices in terms of economics. When Stan Johnson took over as director in 1985, Dave says he focused on an optimization model project for Pioneer making a seed production operation more efficient and less risky.

Dave says of his eight years at CARD that he remembers the people most. “I met a lot of grad students. We must have had 50–60 at the time, a lot of international students. I met and became friends with people here and some I stay in contact with,” he says. And, of course, he also remembers meeting his wife, Kim Blomgren. Kim started working at CARD as Stan Johnson’s secretary in December of 1985, and she and Dave were married in June of 1987.

Working on project teams at CARD helped Dave prepare for a career, he says. “Most projects were groups of several people. Developing communication skills and a technical foundation around optimization modeling, which I’ve used a lot in consulting work, applied problems, and business problems,” were all things he took away from his time at CARD.

Currently, Dave is working as a consultant for Cirrus Partners and works approximately half-time with Ag Partnerships in Curtiss Hall, while also being somewhat involved in family farm operations. Dave’s family farm is near Eagle Grove, and he also helps out with Kim’s family farm, which is just west of Ames.

Kim and Dave currently live in Des Moines, where they’ve been for about 27 years. They have two boys, Andrew and Ben. Andrew has a bachelor’s in economics from ISU, which he received in 2012, and Ben graduated with a degree in biomedical engineering from the University of Iowa in 2015.

Dave says he doesn’t have much free time, but he does enjoy playing softball, and has been on the same softball team for 27 years.