Do You Remember? - Chris Azevedo 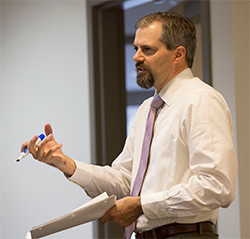 Former CARD assistant scientist Chris Azevedo first became interested in studying economics when he took a principles of microeconomics class at Missouri State University. Chris says he enjoyed his economics class with Dr. Lages so much that he quickly changed his major to economics.

Dr. Lages, in fact, became instrumental in Chris’s career path. “Several long conversations with Dr. Lages resulted in me deciding to go to graduate school,” he says. “Dr. Lages had gotten his PhD from Iowa State in 1967, so he encouraged me to apply.”

Chris started at ISU in 1993, and eventually began working with Cathy Kling and Joe Herriges, who were his dissertation co-chairs. His interactions with Kling and Herriges led to Chris taking a post-doc position with CARD, which eventually transitioned into an assistant scientist position.

“My favorite thing about working at CARD was the atmosphere. It was a pleasure to work with such a great group of people,” he says.

Chris says his experience at CARD helped prepare him for an academic career by helping him refine his research skills. “The neat thing about the research I was involved with at CARD was that it was actually being used to guide policy decisions,” he says.

Currently, Chris is a professor of economics at the University of Central Missouri in Warrensburg, MO. “I’ve been here since I left CARD, and I have thoroughly enjoyed my time here,” he says.

Chris is married to Kari Azevedo, a fellow ISU graduate with a PhD in statistics. Chris and Kari have three children, twin boys Robert and Thomas and a daughter, Elizabeth. Chris says he spends a lot of his free time playing music in a string band, Knobtown Skiffle Band, and watching his kids at baseball games and cross country meets.